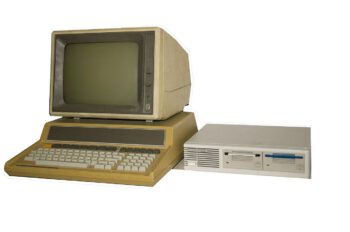 The Hewlett-Packard series 80 of small scientific desktop computers was introduced in 1980, beginning with the popular HP-85 targeted at engineering and control applications. They provided the capability of the HP 9800 series desktop computers with an integrated monitor in a smaller package including storage and printer, at Features

The first model of the Series 80 was the HP-85, introduced in January 1980. In a typewriter-style desktop case, the $3250 HP-85 contains the CPU and keyboard, with a ROM-based operating system (like the 9800 series), 16 kB dynamic RAM, a 5-inch CRT screen (16 lines of 32 characters, or 256×192 pixels), a tape drive for DC-100 cartridges (210 kB capacity, 650 B/s transfer), and a thermal printer. Both the screen and printer display graphics in addition to text, and the printer can copy anything shown on the screen. The chassis includes four module slots in the back for expansion which can hold memory modules, ROM extensions, or interfaces such as RS-232 and GPIB. All components were designed at the Hewlett-Packard Personal Computer Division in Corvallis, Oregon, including the processor and core chipset. 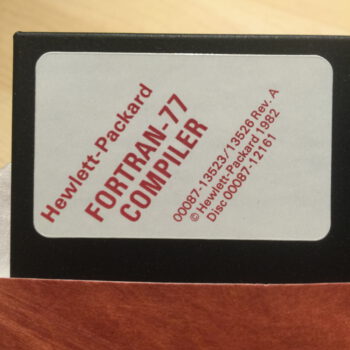 Later models offered variations such as different or external displays, built-in interfaces or a rack-mountable enclosure.

The machines were built around an HP-proprietary CPU code-named Capricorn running at 625 kHz (0.6 MHz, sic) and had a BASIC interpreter in ROM (32 kB).[3] Programs could be stored on DC-100 cartridge tapes or on external disk/tape units.

Despite the comparatively low processor clock frequency, the machines were quite advanced compared to other desktop computers of the time,[4] in particular regarding software features relevant to technical and scientific use. The standard number representation was a floating point format with a 12-digit (decimal) mantissa and exponents up to ±499. The interpreter supported a full set of scientific functions (trigonometric functions, logarithm etc.) at this accuracy. The language supported two-dimensional arrays, and a ROM extension made high-level functions such as matrix multiplication and inversion available.
One of the operating systems available was the the UCSD p-System (IV).

All documents and software are from the hpseries80@groups.io thanks to Brett Hallen.