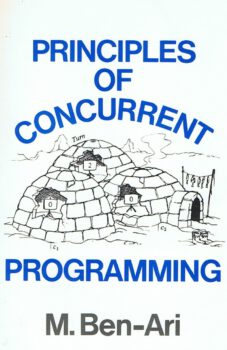 Pascal-S is a subset of Pascal, and was originally written by Niklaus Wirth.
Moti Ben-Ari has built on Pascal-S in his Principles of Concurrent Programming, resulting in Concurrent Pascal-S.

Compared to Wirth’s version of Pascal-S, case statement, records and reals are swiped from this edition of Pascal-S. M. Ben-Ari modified Wirth’s original compiler/interpreter in 1980 to include some basic features that were able to simulate concurrent programming.

First, a cobegin s1; …; sn coend block structure was added, allowing concurrent execution of the statements s1 … sn, which were required to be global procedure calls. These cobegin … coend blocks could not be nested within one another.

Second, the use of semaphores was introduced, with a semaphore data type (really synonymous with the integer data type) and the semaphore operations wait(s) and signal(s), corresponding to Dijkstra’s P(s) and V(s), respectively.