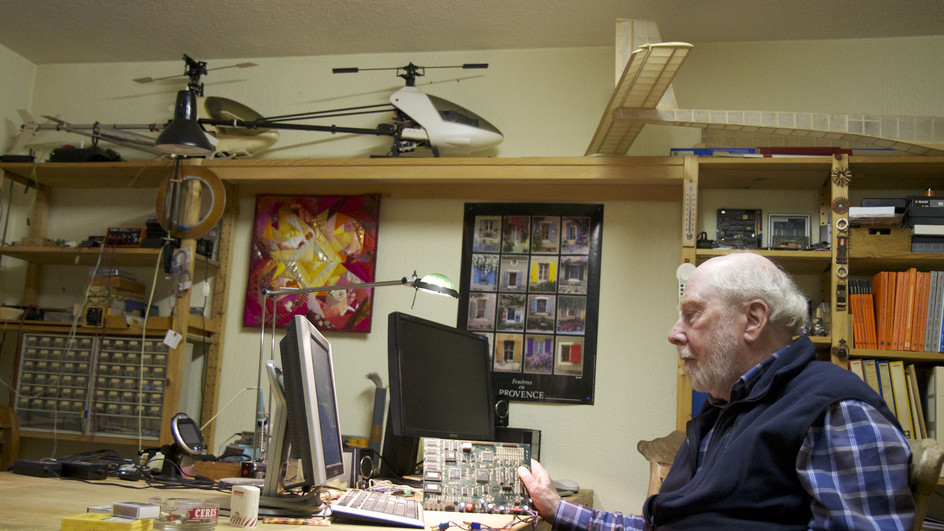 In 1995 Wirth joined a project undertaken at the Institute of Automatic Control and Measurement. The goal was the development of a system to allow a model helicopter to fly autonomously a preprogrammed path. Wirth designed an on-board computer system with a Strong-ARM processor at its core. Aside from the hardware, he also programmed various software tools, including an Oberon subset compiler with additional features for real-time programming. The computer board was built by I. Noack.
The resulting computer system, called Olga, made use of experience with programmable gate arrays, and used the novel Xilinx-Algotronix 6200 fine-grained FPGA for the generation and sensing of pulse-width modulated signals to control the servos. Furthermore, the computer was connected to a compass, a global positioning system (GPS), and a data link via several standard RS-232 interfaces. This system resulted in a drastic reduction of weight and power consumption, and an increase in computing performance compared to the one used before, inspite of the fact that floating-point arithmetic was to be programmed based on integer arithmetic.

The helicopter carrying Olga weighs about 15 kg and is powered by a 35ccm engine. Wirth pushed for a second project based on a downsized helicopter model with a weight of less than 5 kg and a conventional 10ccm engine. This was realized with a considerably smaller computer board, but the same Strong-ARM core and software base. The large FPGA was replaced by several small PLDs. This project, Horla, was confined to the more modest goal of using the computer only to stabilize the inherently unstable craft, while position, speed and direction would remain under remote control by the pilot.

Both projects collected in a remarkable way the various techniques and tools on which Wirth had worked during the past decade: Compiler, operating system, programmable devices (FPGA, PLD) and their design tools including the language Lola, and circuit design in general. Both projects were successful, although only after several years of effort – and patience.