The Edison System, 1982, is comprised of both an operating system and programming environment. The system language, also named Edison, is simple yet powerful. The Edison language is comprised of only a few basic commands and structures. However, these basic fundamentals have been carefully chosen to establish the necessary foundation to produce powerful and extensive applications. The Edison System possesses adequate development facilities, yet is contained in a very small quantity of code. Per Brinch Hansen’s final development system for a PDP-11 contains approximately 10,000 lines of program text. This text includes the operating system, the compiler, the editor, the diskette formatting program, necessary assembly code, and other utility programs. This establishes a powerful yet small environment for the development of concurrent programs.

Compiler for Edison in C and lex 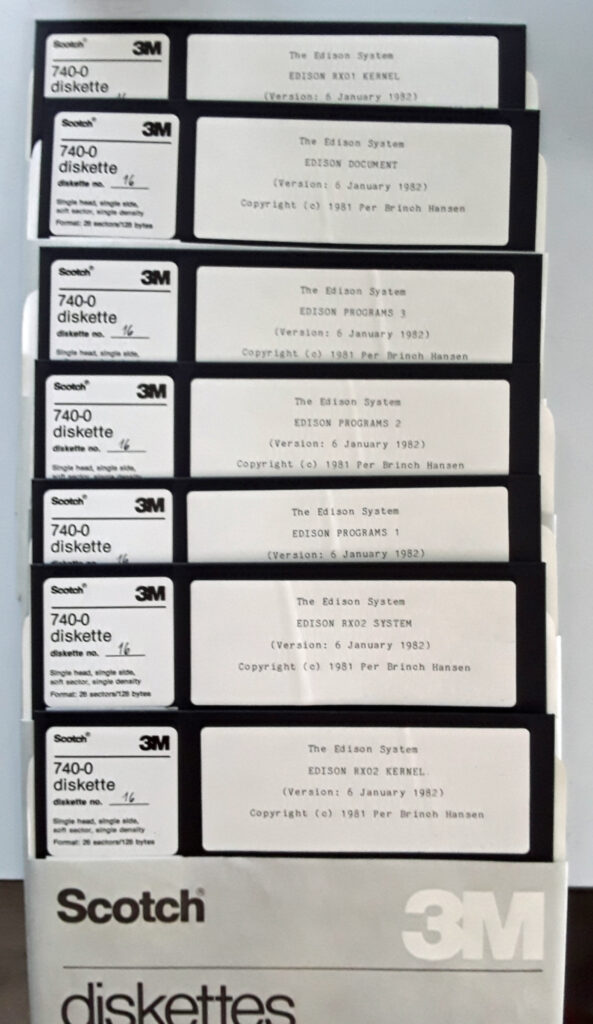 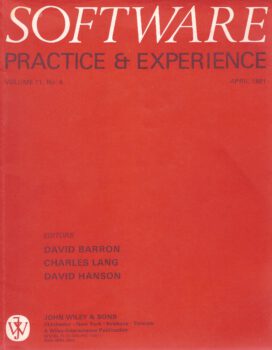 A whole edition of this magazine devoted to the Edison system by Per Brinch Hansen, as sole author. 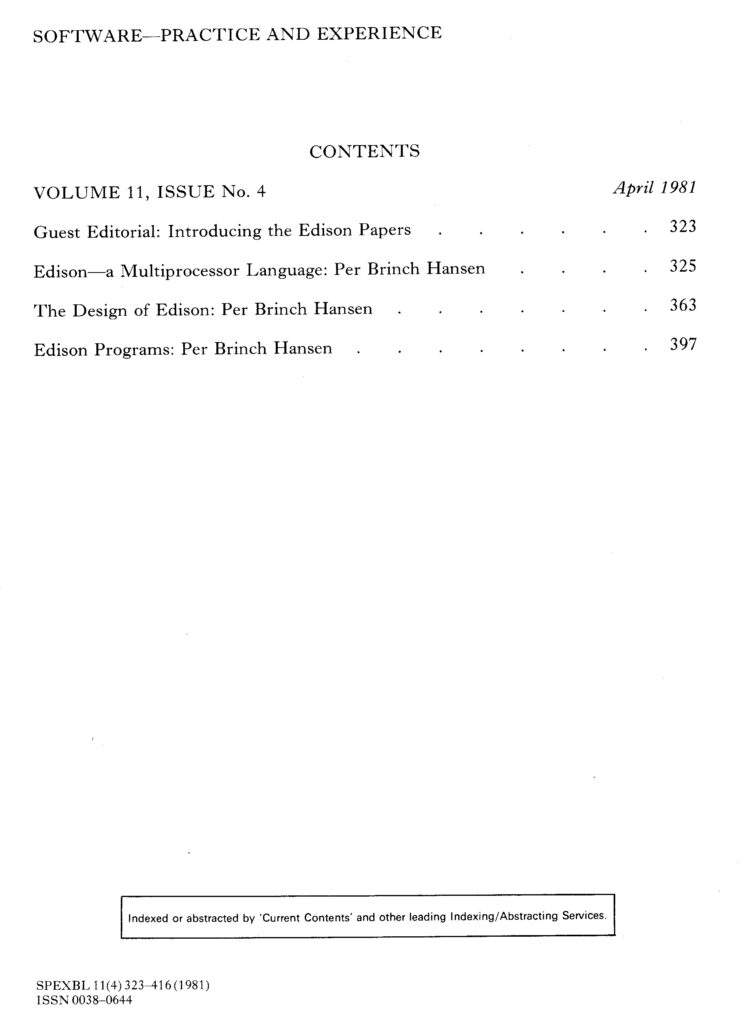 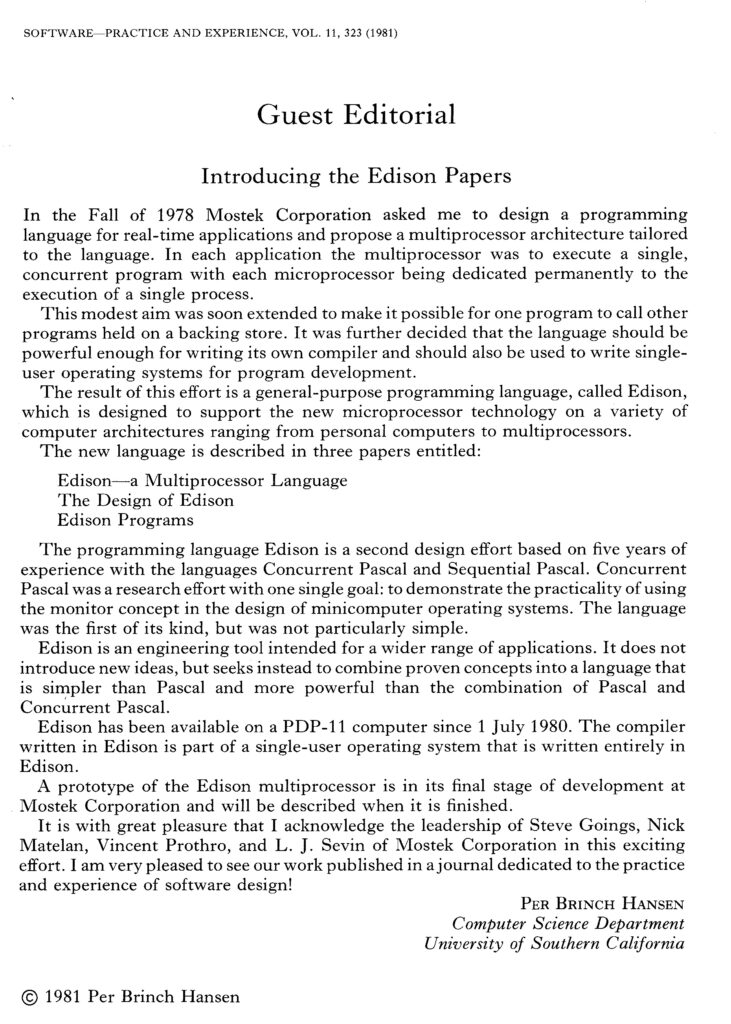 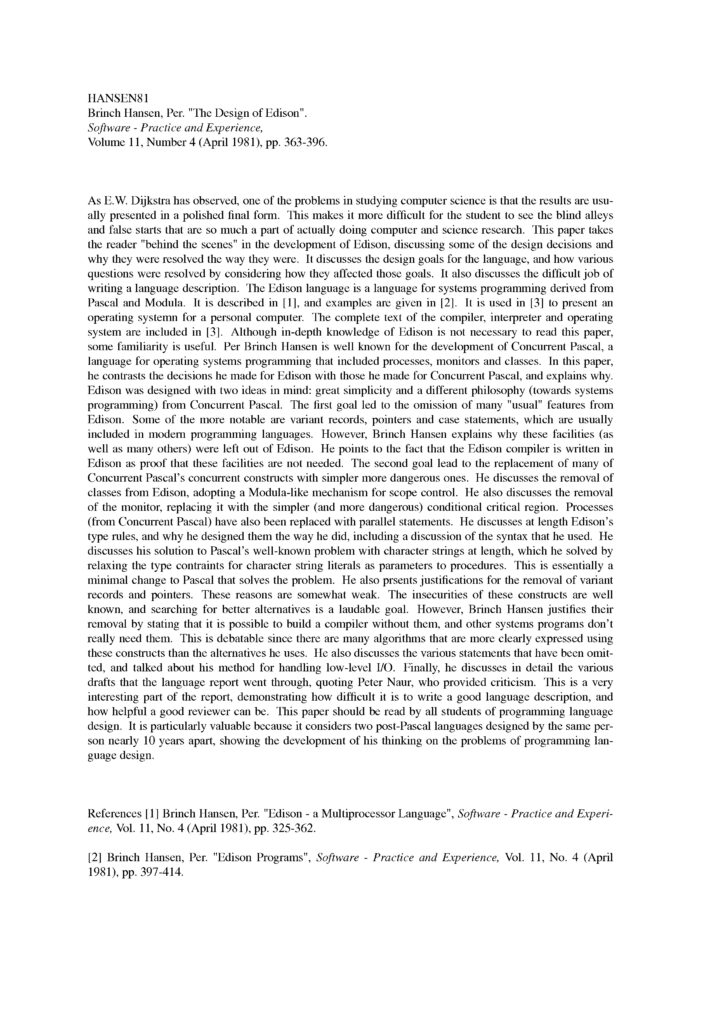 This paper defines a programming language called Edison. The language
is suitable for teaching the principles of concurrent programming
and for designing reliable real-time programs for multiprocessor systems.
Edison is block structured and includes modules, concurrent statements,
and when statements.

This paper defines the programming language Edison. The language
is suitable both for teaching the principles of concurrent programming
and for designing reliable real-time programs for a multiprocessor
system.

The overriding concern in the design of Edison was to achieve
simplicity in the design of medium-sized programs of 1000-2000 lines
of text. This aim led to the selection of a small number of abstract
concepts for modular programming. In particular, the issues of
modularity, concurrency, and synchronization were
separated into distinct language features.

An Edison program describes operations on named entities called
constants, variables, and procedures. The constants and variables
have data values of fixed types. The types determine the possible
values of these entities and restrict the operations that can
be performed on them.

The data types integer, boolean, and character are standard types.
Other types are introduced by enumerating their values
or by describing how the values are composed from other values.
The composition methods for new types are the well-known arrays,
records, and sets. Every type has a name, and two operands are
of the same type only if their types are denoted by the same
name and have the same scope.

The computation of new data values from existing
values is described by expressions in which the operands
are constants, variables, and function calls, while the operators
are the conventional arithmetic, boolean, set, and relational
operators. The computation of composite values in terms of other values
is described by expression lists called constructors.

The named entities and statements of a program are grouped into
blocks of two kinds, called procedures and modules. Blocks can
be combined to form other blocks in a nested fashion.

The programming language Edison is a formal notation
in which programs can be written. The programs are texts
composed of symbol sequences known as sentences.

where S stands for the name of the syntactic form while E stands for
a syntax expression that defines the corresponding class of sentences.
The name S consists of a capital letter possibly followed by small letters
and spaces.

Example of a syntactic rule:

A syntactic expression has the form

where T1, T2,…, Tn stand for terms that define classes of sentences.
A sentence of this form is composed by writing a sentence belonging to anyone of
the classes.

Example of a syntax expression:

A syntax term has the form

where F1, F2,…, Fn stand for the syntax factors that define classes
of sentences. A sentence of the form is composed by writing a sentence of each
class in the order shown.

Example of a syntax term:

A syntax factor has one of the four forms:

Characters are used to form basic symbols
(see Section 2.3).
A graphic character is represented by a graphic picture
or the deliberate omission thereof (a space). A new line
character marks the end of each line of text.

The special symbols and the word symbols have fixed meanings
which will be defined later.

Any capital letter used in a word symbol is considered equivalent
to the corresponding small letter. In this report the word
symbols are printed in boldface type.

Any basic symbol preceded by one or more separators stands
for the basic symbol itself. Two adjacent word symbols or names must be
separated by at least one separator.

A character string is an abbreviation for a character list that
contains the same sequence of graphic characters.

A program is a description of one or more related data processes,
each process taking place in a number of separate steps. In each step
a well-defined action (an operation) is performed on a set
of entities (the operands).

The act of following a program text and performing the operations
described by it is called the execution of a program (and its operations).
A person or device that executes a program (or part of it) is called
a processor.

The operands of a program generally denote data values that
either remain fixed (constants) or change during the execution (variables).

The execution of an operation will have one of three outcomes: