In Pursuit of Simplicity Presentation slides of A Symposium Honoring Professor Edsger Wybe Dijkstra May 12–13, 2000

A Case against the GO TO Statement.

Articles and books by and on Edsger Dijkstra 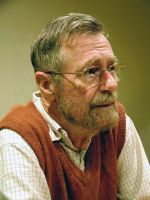 How do we tell truths that might hurt?
Sometimes we discover unpleasant truths. Whenever we do so, we are in difficulties: suppressing them is scientifically dishonest, so we must tell them, but telling them, however, will fire back on us. If the truths are sufficiently impalatable, our audience is psychically incapable of accepting them and we will be written off as totally unrealistic, hopelessly idealistic, dangerously revolutionary, foolishly gullible or what have you. (Besides that, telling such truths is a sure way of making oneself unpopular in many circles, and, as such, it is an act that, in general, is not without personal risks. Vide Galileo Galilei…..)

Computing Science seems to suffer severely from this conflict. On the whole, it remains silent and tries to escape this conflict by shifting its attention. (For instance: with respect to COBOL you can really do only one of two things: fight the disease or pretend that it does not exist. Most Computer Science Departments have opted for the latter easy way out.) But, Brethren, I ask you: is this honest? Is not our prolonged silence fretting away Computing Science’s intellectual integrity? Are we decent by remaining silent? If not, how do we speak up?

To give you some idea of the scope of the problem I have listed a number of such truths. (Nearly all computing scientists I know well will agree without hesitation to nearly all of them. Yet we allow the world to behave as if we did not know them….)
*

Programming is one of the most difficult branches of applied mathematics; the poorer mathematicians had better remain pure mathematicians.
The easiest machine applications are the technical/scientific computations.

FORTRAN —”the infantile disorder”—, by now nearly 20 years old, is hopelessly inadequate for whatever computer application you have in mind today: it is now too clumsy, too risky, and too expensive to use.

PL/I —”the fatal disease”— belongs more to the problem set than to the solution set.

It is practically impossible to teach good programming to students that have had a prior exposure to BASIC: as potential programmers they are mentally mutilated beyond hope of regeneration.

The use of COBOL cripples the mind; its teaching should, therefore, be regarded as a criminal offence.

APL is a mistake, carried through to perfection. It is the language of the future for the programming techniques of the past: it creates a new generation of coding bums.
The problems of business administration in general and data base management in particular are much too difficult for people that think in IBMerese, compounded with sloppy English.

About the use of language: it is impossible to sharpen a pencil with a blunt axe. It is equally vain to try to do it with ten blunt axes instead.
Besides a mathematical inclination, an exceptionally good mastery of one’s native tongue is the most vital asset of a competent programmer.

Many companies that have made themselves dependent on IBM-equipment (and in doing so have sold their soul to the devil) will collapse under the sheer weight of the unmastered complexity of their data processing systems.

We can found no scientific discipline, nor a hearty profession on the technical mistakes of the Department of Defense and, mainly, one computer manufacturer.
The use of anthropomorphic terminology when dealing with computing systems is a symptom of professional immaturity.
By claiming that they can contribute to software engineering, the soft scientists make themselves even more ridiculous. (Not less dangerous, alas!) In spite of its name, software engineering requires (cruelly) hard science for its support.

In the good old days physicists repeated each other’s experiments, just to be sure. Today they stick to FORTRAN, so that they can share each other’s programs, bugs included.
Projects promoting programming in “natural language” are intrinsically doomed to fail.

Isn’t this list enough to make us uncomfortable? What are we going to do? Return to the order of the day, presumably…….
18th June 1975
NUENEN

The Netherlands prof.dr.Edsger W.Dijkstra
Burroughs Research Fellow
PS. If the conjecture “You would rather that I had not disturbed you by sending you this.” is correct, you may add it to the list of uncomfortable truths.
EWD