Note that this version is still beta quality! Your feedback is appreciated!
Contents

How the Pascal-M system works

The Pascal-M system will let you write Pascal programs and execute them on the 6502, e.g. the KIM-1 or the console of the PC.
The Pascal dialect is standard Pascal (no reals for example) as described in the second edition of ‘The Pascal User Manual and Report’. It can (could in older versions!) compile itself.

To get a Pascal program running on the KIM-1 the Pascal-M 2K1 system requires the following steps.

Step 1: Write a Pascal program with any text editor on your PC, create ASCII text files.
Save the Pascal source with extension .pas, and keep the editor open. I use Notepad++ on Windows, any editor will do.
Step 2 – 4: Start the PascalM2K1 program, a GUI program, and fill in the name of the Pascal source.
Press Compile and if the Pascal-M compiler sees no errors goto step 3 and press Load else go back to the editor.
Note the load address is needed to tell where the code should go in memory, the default is fine for now.
See the section on ‘Memory layout’.
Step 4 requires to fill in the name of the binary of the 6502 interpreter (default pascalmint2k1.bin, make sure it is found).
Also fill in the name you want for the 6502 program (Binary, a papertape version is produced also).
Fill in the upper memory RAM limit in your KIM-1. the default is for 32K RAM above $2000, max is $9FFF.
Press Link.
Step 5: Take the papertape file via a terminal emulator to the KIM-1 (in TTY mode) and run it from start address $2000 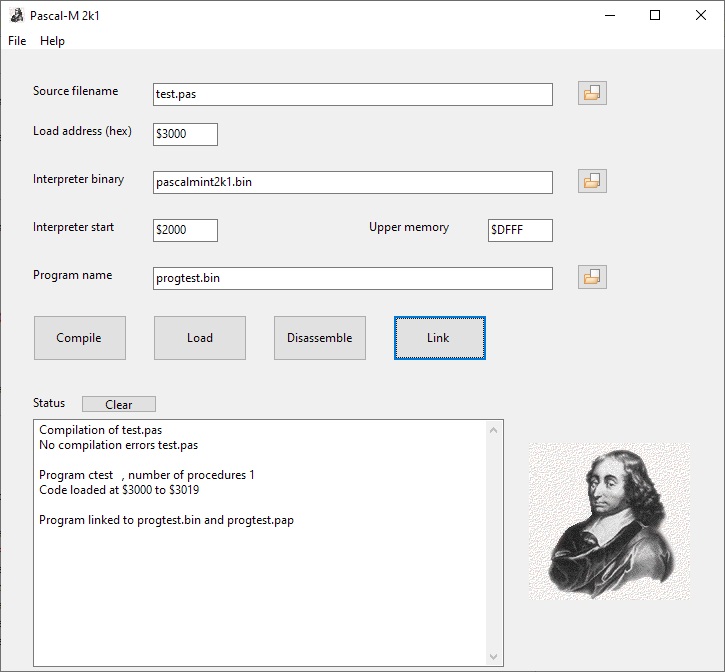 During the steps of PascalM2k1 many files are produced. If for example you start with helloworld.pas and finally link to runhelloworld.bin the following files will be present:

You will only have to keep the helloworld.pas and the resulting program runhelloworld.bin and pap, the others can be made again.

The steps described above for PascalM2k1 can also be done with command line utilities. No argument given will prompt for answers.
Help given with -h. Functionality and steps identical to the PascalM2K1 program. Same files produced. 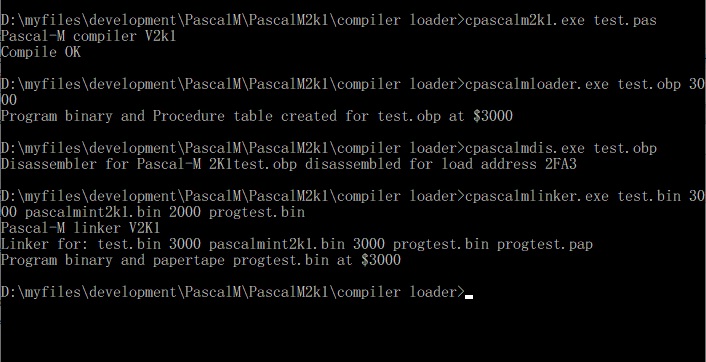 Pascal-M is close to standard Pascal, but there are limits due to the P2 origin (close to the second ‘Pascal User Manual and Report’,
recommended as description for Pascal-M) and the limitations to make a small compiler for an 8 bit target.
When you read the compiler source (pascalmcompiler.inc) you will see it is a real language, and can compile itself
(if you strip all enhancements made by me, see SMPASCAL.PAS on the website for the last version that compiles on the KIM-1!)).

A Pascal-M program requires RAM from $2000 and up.
The upper limit is variable and can be maximum $DFFF.
The memory layout of a Pascal-M 2K1 system is:

The interpreter starts at $2000, point the monitor there and Go. After the Jump the memory layout is found: first location of M-code (default $3000), end of memory (default $9FFF) and end of M-code/start of heap (dependent on the size of the M-code).
The linker fills these addresses.

Without the optional debug parameter the Mcode program is executed:

With the debug parameter a command line drive debugger is started. Use also the Mcode disassembly output to see what is happening in the Mcode machine.

Compiling and building the programs from source

The system is made up of main programs that ‘include’ the actual functionality. This way the command line utilities and the GUI pascalM2k1 share the code.
If a change is made to an .inc file both vcalling programs may need attention and tests.
No extra components are used, standard Lazarus will do.
Note that the ‘mode’ of the units is important, the compiler needs mode $delphi.

The 6502 interpreter is living in the folder 6502interpreter.
No special assembler syntax is used, TASM 32 bit for Windows command line is included.

will produce the pascalmint2k1.bin file required

Port to other systems

The Pascal-M system is easy to port to other systems. Another 6502 system is quite easy, adaptations on the assembler source will be:

Another platform is a bit more work. Use an assembler or compiler, the interpreter needs to be written for the new target. Take the Pascal interpreter as example, it is well documented.

How I spent 40 years on getting so far ….
Pascal-M is the name of the Pascal compiler written by Mark Rustad, around 1977.
It was based (and mostly identical) to the portable P2 Pascal compiler, from the ETH Zurich group led by Niklaus Wirth.
The Px Pascal compilers are portable compiler-interpreters, quality compilers and easy to adapt interpreter to new hosts.

The adaptations by Mark Rustad were in the code production, the M-code is byte oriented and more efficient in memory demands.
File I/O was stripped as was floating point. Only chars, integers 16 bit and booleans. Uppercase only. Input/output was for a teletype, so input was either the keyboard or a HSR (High Speed Reader), output a printer or a HSP( High Speed Punch) via a software
switch.
Mark Rustad told me he ported the compiler to 6800 and 6809. G.J. van der Grinten did work on the interpreter part for the KIM-1 and wrote a 6502 interpreter.
The Micro Ade editor was adapted to produce Pascal text files.

In 1978 I received from the KIM Club in the Netherlands a version of this Pascal-M system, consisting of a KIM-1 tape with the compiler and interpreter and Micro Ade,
listings of the compiler (in Pascal), preliminary M-code description, the interpreter (in 6502 assembler) and the Micro Ade patches.
It was never made into a product for the KIM club, it was a nightmare to use. From entering text to running a program, all from audio cassette files, it took around an hour.
The old days of papertape and cards were gone already. But the time of cross-compiling or floppy drives connected to the KIM-1 was not there yet.
I got no further than a ‘Hello world’ program once and gave up.

In 1983 I started typing in the source on a PDP-11 with RSX-11M Pascal. And moved on to VAX/VMS with the excellent VMS Pascal. After some years I had the compiler, an interpreter
written in Pascal with debugger and the original 6502 interpreter on tape. This system produced for the second time, in 1986, a running ‘Hello world’ on the KIM-1.
I started expanding the compiler, bringing back P2 functionality like file handling, text files are now supported. Lowercase also. Bugs fixed.

But then I bought a CP/M system and the KIM-1 was put aside. Pascal-M forgotten for several years, Pascal compiler technology not.

And now in 2021 a Lazarus shell around the steps required to produce a working program was programmed. The 6502 interpreter was finally assembled from source again.
Pressing a couple of buttons is now all it takes to produce a program running on the KIM-1 (and as console on the PC).
The command line utilities are refreshed also. So a ‘Hello World’ takes a a couple of minutes from source editing to running on the KIM-1 (Simulator).
The motivation for the KIM-1 Simulator was mostly for being able to test the Pascal-M system!

Error messages from the compiler